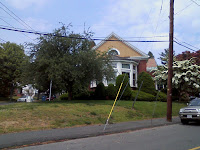 The South Hadley Public Library was established in 1906 and other associated libraries in town date back to 1802. Well, I felt that I wanted to jump right into this and as it was pointed out to me there is really no excuse for me not to visit this one first as it is within walking distance. I visit here often and basically just love this library. So I ventured forth with a book that needed to be returned. Returned within 2 days or they were sending the late book commandos after me. They don't mess around in South Hadley. 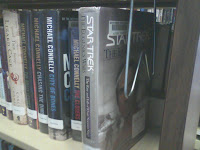 So I began my journey, but first I needed lunch. I had been fasting in preparation for a little bloodwork I needed done in the morning. The last thing I wanted to do was pass out from lack of food and blood loss. I don't think that the circulation desk would appreciate that very much. The Egg and I is a wonderful little hole in the wall restaurant that is on the way. While eating I finished reading The Eugenics Wars: The Rise and Fall of Khan Noonian Singh. Normally it really doesn't take me that long to read a book where I don't get the book back in time. I am used to reading Robert Jordan... nuff said there. I was just busy with things (like writing, karate, etc.) and it had nothing to do with other factors that I have been accused of being (like an incurable procrastinator). So as I finished my tuna melt on rye I finished my book. 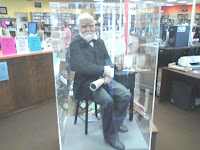 As you walk in the main entrance above you are greeted by "Andy" (Mr . Andrew Carnegie) . As many of you well know he is one of the patron saints of libraries in America and the U.K. having donated much of his fortune to the establishment of centers of learning and culture. His donation of $10,000 helped establish this library in the Falls section of South Hadley. Andy is very much a fixture in the library and has a personality all his own. As I walked past him with my late book I felt that he was going to hit me with that rolled up paper. I returned my book and paid my $1.30 in accrued fines and forked over some extra money to the library in the spirit of Andy there. I did what I had been meaning to do since forever and became a friend to the library. 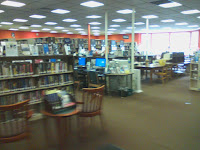 Every time I have walked into this library I took it for granted. I never really actually walked all around the place. I normally go in, poke around the stacks looking for a book that strikes my fancy and then leave. Maybe if I need to print something out I'll go there and use the printer. (Yeah, I have a printer, two actually, but I need to buy ink. I just don't feel like buying it now.) Well anyway, this visit was for my project and my blog! (Woo!) So this time I actually walked up the little ramp going past the circulation desk and entered... The Children's Section. 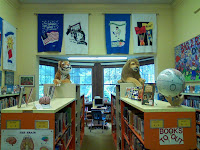 The first thing that came to mind as I walked by was the Wistariahurst Museum in Holyoke. I walked past those lions every day on my way to Our Lady of Perpetual Help school back in grade school. I loved those lions even though at times I felt that they were going to jump off of their pedestals and eat me. I had an active imagination as a kid. I was impressed by the total vibrancy of color in that room. For a quaint, enjoyable library they had a nice selection of titles in there and other learning aids. 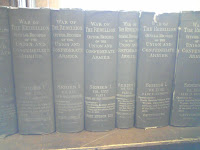 Beyond the children's room was the community room. Again, I have never really explored this section of the library. I found the 'older section'. In any building like a library or museum there is always an 'older section' hidden away. You find the gems in there. Like this set of beauties which were probably purchased for the library ages ago and used back when books were the only medium of major information spreading. I love finding sets of books like this and just poking through them and enjoying their smell and aura. 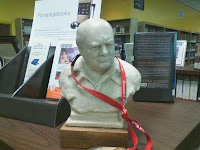 (Winston!) So after I was done poking through I decided that I was going to grab a book to take with me. As Star Trek: The Eugenics Wars is a multi-book series I grabbed volume 2. I was very much impressed with the first volume so picking up the second book was the natural progression. Apparently the South Hadley Public Library is going to be rebuilt and possibly moved. I can understand, but still I can't say that I am going to happy to see it somewhere else, if that happens. Should I hear more I will update you on that process.

Here is the official link to the library: http://www.shadleylib.org/index.html

Next on tap... The Holyoke Public Library.
Posted by Eric Baker at 1:11 PM