The Theft of the Lorax 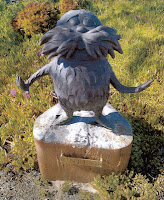 Tonight I have a news item which I am going to examine which is truly sad. Yes, some of the less scrupulous may have laughed at this when they heard it in the news. Though in truth there really is nothing to laugh at here and it really makes me mad when I think of the disrespect. The item I am talking about is the theft of the Lorax statue from the yard of the widow of Dr. Seuss.
Is it the end of the world for her? Probably not. Of course it is insured. I am sure that she is set financially. There are some who will say that it is only material. Yes and no. I can see where, yes, it is only an object. It is replaceable. However, that is a testament to her late husband's work. Those people who stole knew exactly what they were doing and what they were going after. This isn't some Robin Hood-like 'justifiable' theft. This was stealing for the full purpose and intent for stealing a piece of unique art for sale on the black market. This was not some bumbling copper/bronze thieves. These were art thieves who targeted an old woman. Despicable.
Yes, if the Lorax were stolen and it ended up somewhere else on purpose like say on the front steps of city hall or on top of the police chief's car then that would only be a prank. It could be funny on a level if she had a sense of humor about it. In Holyoke, there is an establishment called the Yankee Pedlar Inn. (My Mother worked there for a time.) It is a beautiful landmark in the city. I have been inside it. It is truly a nice place. Well, they hay a horse in the front called 'Dobbin'. Poor Dobbin has been through so much in his tenure in front of that restaurant. It has been painted pink. It has ended up in the intersection in front of the Inn. It has actually ended up all over Holyoke. It is a piece of the city's pop-cultural history.
I wish that this incident were the case for the $10000 Lorax statue. It is not. This crime was grand theft larceny. This is a few years in jail if caught. These people, if caught, deserve their jail time. Not only for the theft of the statue but also for the terrorizing of an old woman who will fear for her safety. Finally, this was a crime against the legacy of Dr. Seuss who is part of this country's cultural heritage. While, in the grand scheme of the world's travails, probably not the worst crime, but still I had to take notice.