Breastfeeding in a Library? 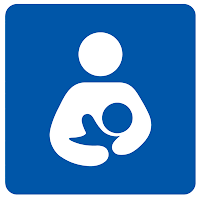 Dateline - Minnesota. Now here is an interesting article. This issue has been in the news here and there as of late - Public Breastfeeding. Now leaving the salacious details aside - is this a library issue? It is not exacting two concepts one commonly puts together. However, if this happens in your local Walmart having it happen in the library was due to happen. In the article a woman who was breastfeeding her child was asked to leave the premises of the library or to go to the bathroom and do it. She was within her rights to do so, but the security guard and librarian asked her to be more discreet. When she refused and a police officer showed up the officer informed them that she was allowed to do it.

In my personal opinion as long as she is not being an exhibitionist about it she has the right to do it. The article says that in the opinion of the guard she was exposed - how much is not clear. The library is considered public grounds. However, I can understand the other side of this. Again, my thoughts here, why the library of all places? But then again, do I want a screaming, hungry baby in the library? There are medical, nutritional arguments against using formula; maybe she can't pump her own milk? Who knows?. Why should she be asked to leave just to feed her child? Using the bathroom is just plain unsanitary and forcing her outside deprives her of her rights to use the library.

It is interesting how the library truly forces an examination of rights, first amendment conflicts, usage and access disputes. Everybody has a right to be in the library as long as they are obeying the law. This issue is a learning issue. I can't blame the guard here. He believed that he was defending the public sanctity of the library. I respect him for that. I'd like to see him in Springfield kicking out the idiots playing music in the reading rooms. The librarian too is not at fault. I was a bit put off by the reaction of the mother throwing a fit about it. She has to be aware that public breastfeeding, truly, is a long, dormant right which is being asserted again. Was she trying to create a scene for attention? I don't know her mind here.

Despite what tragic turns society chooses to take the library remains a place of knowledge, learning and public awareness.

Here is the link to the article:

Coming up next: More Shutesbury Shenanigans!