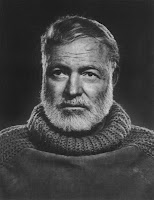 Nestled down in the warm Florida Keys is the Hemingway museum. I have had the personal pleasure to visit this museum back in the mid 90's. It truly is a lovely plot of land. The Hemingway Home was built in 1851. It was not originally the Hemingway's but was purchased and reconstructed when he returned stateside from Europe.

For those of you who may be unfamiliar with the author. He was an extremely talented writer and personal participant as a soldier / field reporter in both World Wars and the Spanish Civil War. He writing is extremely well-crafted prose with a truly hands on feel for what he is writing. His life was full, but ended tragically on July 2, 1961. His life spanned the massive generational and cultural changes which swept through the nation in the first half of the 20th Century. His writing from A Farewell to Arms to The Old Man and the Sea told the tales life's struggles. In 1954 he was awarded the Nobel Prize for Literature. There is so much more to tell that can be included in a blog post.

The Hemingway Museum preserves and tells the life of this man who had a tremendous impact on the literature of the times. One of the more curious aspects of the museum is the Hemingway Cats. In his will Mr. Hemingway left funds for the care and preservation of his famous polydactyl (six-toed) cats. The first of which was given to him by a sea captain down in the Florida waters. Now up to 50 cats are cared for and live on the premises of the museum.