Sometimes The Movie Is Better 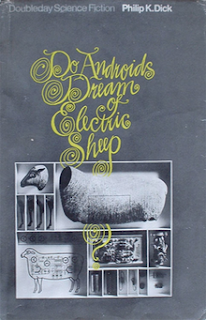 Recently I have had the pleasure of reading a book which has been on my 'to read' for some time. My list is rather long and constantly being added to but on occasion I get to cross one off. The book that I read was Do Androids Dream of Electric Sheep? by Philip K. Dick which was published in 1968. That story later became the Ridley Scott directed 1982 sci-fi classic Blade Runner. The movie pretty much brought the cyberpunk genre to the masses.

Now in an effort to be transparent and open I will say that Blade Runner is one of my favorite movies of all time. The acting talents of Harrison Ford, Rutger Hauer, Sean Young and Daryl Hannah combined with a fantastic Vangelis soundtrack just bring to life an utterly dystopian futuristic world. The aura of the movie is pure early 80s, but it is cross-thatched with a perfectly executed film noire aspect.

I was rather young when the movie came out so I learned of the book some time after the fact. Now it is quite understandable why people habitually say in general that the book is better than the movie. It usually is. A book has less time and pacing constraints. With that in hand books have more time to explore ideas and generate greater plot development. When it comes to Hollywood 'meddling' with perfectly good stories I am right up chastising with a finger of accusation. And I am justified when I do, but I am giving this one back. 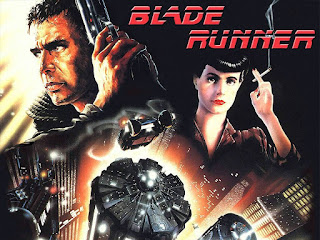 In this case the screenplay developers knew what they were doing. I enjoyed reading Do Androids Dream of Electric Sheep?. I knew exactly why P.K.D. set things up the way he did. The logical arguments he used in setting up the universe of the story were balanced. It all worked.

Unfortunately, in comparison the movie told the story better. The movie removed some of the more cumbersome elements of book. (For those in the know I'm referring to the elements of Mercerism, Buster Friendly and the rogue police station.) The movie also gave Rachel a better role and made Roy Batty a more ominous adversary for Deckard.

The book has its positives though. The book explained the situation completely. You understand the importance of animals. After I read the book I knew exactly what was going on and why. The book explains the importance of the Voight-Kampff test in a detailed light. But for pure story telling the movie focused. It focused on Deckard and the motivations as to why the replicants did what they did. 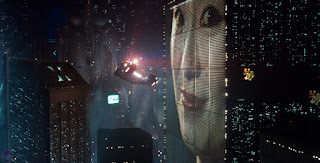 I must repeat. I enjoyed the book. The end of the book just seemed a bit rushed and confused which left me a little sour. The author went through considerable effort setting up the world and then bang Deckard offs the three remaining replicants in one scene then trots off into the desert. I wanted more.

The time difference between the book and movie is only fourteen years. I'm not going to factor that in. The science and culture of the book equates evenly enough to the book.

Although I will say that both the movie and book sinned in killing off Pris way too quickly.

For any fan of Blade Runner I would certainly recommend reading Do Androids Dream of Electric Sheep? if you want a fuller exploration into the story. 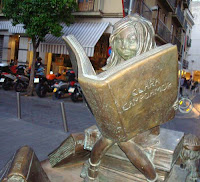 My latest Net travels brings you this lovely young lady in the picture. Pintarest has become my distraction of late as I wait in line at the deli counter. When I saw this statue slide across the screen I was instantly smitten and pinned it. Now I had no idea who the statue was dedicated too. I read the name on the book and saw 'Clara Campoamor' as the title on the book. The name did not ring any bells. I was thinking maybe she's the young heroine of a Spanish fable that I hadn't discovered yet. Perhaps she was a feisty and precocious bookworm along the lines of a Nancy Drew.

Not even close, please forgive me, ardent feminists, for not picking up on the name or the date of 1931 earlier. 1930s Spain was a not a fun place to be, but if you were an author of that era you were there (see Ernest Hemingway). In truth Clara Campoamor was an influential Spanish suffragette who pushed the cause of equality in Spain. She was active in the Second Republic before its collapse and it was her influence on the writing of the new constitution in 1931 which led to language including the voting equality of women. Interesting note she was elected to the 1931 Constituent Assembly by a male-only vote. She was forced to flee to Switzerland during the Spanish Civil War after Franco seized control.

I tried to look for some information on the statue itself. There were many notes saying 'Hey, cool statue with a girl reading a book'. The information is a little sketchy but I did find out that it was recently dedicated in Seville in 2007 was created by Anna Jonsson. (I tried looking her up but no luck). After a little more digging with the help of Google Translate and Babelfish I was able to dig up a few more pictures of the statue and more importantly the dedication plate. 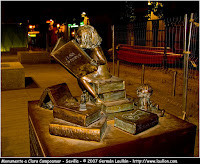 The statue is an interesting way to pay homage to Clara Campoamor. I mean the statue is innocence personified. The girl looks more akin to Lewis Carrol's Alice than any relation to a political figure from 1930's Spain. I'm not complaining. It got me curious and I went the extra few miles to find out what the whole statue was about. I'm glad that Spain made it through the fire and there exists a safe place for this girl to read about such women who came before her.

Posted by Eric Baker at 6:58 AM No comments: